Warning: Surgery and other graphic imagery may be displayed on this page.
LIVER TUMOURS – LOBECTOMY

Finding out that your beloved pet has a liver tumour, although daunting, is not the end.  Your dog or cat can undergo surgery to have the mass taken out.

Solitary large masses found in the liver are termed “massive tumours” or hepatocellular carcinomas.  This type is most common and accounts for 50% of the tumours that are found in dogs.  These start in liver cells (hepatocytes) and their spread rate is slow.  Bile duct carcinomas are the second most common tumours in dogs.

When the cancerous cells of the tumour originated elsewhere and have spread, causing a liver mass, the mass is called a secondary tumour or a metastasized tumour.  Metastasized tumours of the liver occur more frequently than tumours that begin in the liver. Liver tumours that are primary to the liver develop from bile ducts, connective tissue, blood vessels or cells that produce hormones, also known as neuroendocrine cells

A diagnosis of myelolipomas, carcinoids, or sarcoma is possible when your pet shows signs of having a liver tumour.  These tumours are rarely found and less common.

Signs that your pet has a tumour of the liver are vague and can point to many other diseases or health issues.  This makes diagnosis difficult.  However, three quarters of the dogs and cats with a liver tumour will eat less; be drowsy or lack energy; lose weight; pass water more frequently, or throw up.  They can also have a swollen abdomen (fluid) and have fits.

When liver disease is present, the sclera of the eye will be yellow in colour.  Gums and auricles of the ear will be dull in colour and loss of hair is present. 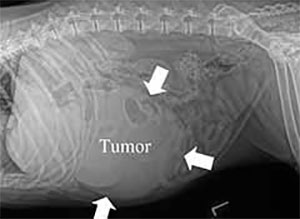 Image 1 below is a radiographic image of a big tumour presenting in a dog.  The borders of the tumour are indicated using arrows.

Liver tumours can be felt when your veterinarian pushes on the abdomen.  They will order more tests to confirm their suspicions.  These can comprise full blood count tests to get a profile of the blood of the animal, as well as a urine profile and coagulation profile.  Radiographic imaging of the torso and abdomen will be required as well as ultrasound images.  More advanced testing can be advised including computed tomography (CT) or magnetic resonance (MRI) imaging.  On receiving results a diagnosis can be made.  Usually, these tumours can be removed through surgery.  A veterinary surgeon who is board certified through ACVS will normally perform these operations because liver operations are complex and hold a high possibility of bleeding occurring. 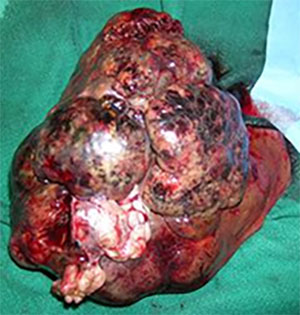 Image 2: A tumour that has been taken out of the liver.

Single masses are usually removed by surgical operations as long as there are no secondary growths or further metastisation. The abdomen is cut open so that the liver is visible. An apparatus called a stapler is used to remove tumours that are closer to the surface and visible.  A tumour that is not visible or deeper within the liver will need to be removed by carefully dissecting to eliminate it.

Further treatment options include Chemotherapy may be necessary. The response of the organ to the treatment is monitored by doing a biopsy.  A tumour that cannot be removed surgically is treated by administering a glue type injection into blood vessels the supply the tumour.  This aid in shrinking the tumour and although it is not a cure will increase the lifespan of the animal.

The animal will usually be in ICU after the operation, where pain will be controlled.  Dehydration will be prevented by using a drip to feed, and to administer medication.  Organ functioning will be monitored daily using blood tests.  These will also show if there is any bleeding internally and will allow the carers to know if any transfusion of plasma or blood is required.

Once your pet is discharged, you will need to give them antibiotics and pain pills at home.  They may eat a diet that is low in fats if you choose to cook for them until they return to their normal diet.  Due to the fact that the animal will try to lick its wound, a collar (called an Elizabethan Collar) will be fitted to stop this.  You can also use a T-shirt to cover the surgical cut.  A follow-up appointment will occur within two weeks after the procedure.  This is when chemotherapy (if necessary) will start. The prognosis is excellent and your pet can live a normal life three to four years post-surgery.  Spreading of cancer occurs in five percent of cases in dogs.

In cats, if a resectable biliary cystadenoma, is removed, survival is extended. Prognosis is reduced if the tumours grow again. With tumours that are sarcomas or carcinoids, a successful outcome is less achievable due to the fact that most of these tumours are secondary and have spread from another organ.

The lifespan of a dog that has had a tumour removed is improved fifteen times, compared to a dog who does not have a tumour removed.  Unremoved tumours of the liver can burst and this becomes dangerous due to bleeding internally.  Another aspect of a tumour is that it can push against the primary bile duct, stopping bile drainage which is what causes the yellow appearance called jaundice.  Another side effect is that it pressurizes organs or abdominal blood vessels.  This is what leads to throwing up or abdominal swelling.  Tumours of the liver can make a substance similar to insulin, which will cause blood sugar to be lower than it should be.  This is, however, rare.

Bleeding that continues post-operatively (prevalence of less than two percent), can cause death.  Other problems after surgery can be an infection, tumour regrowth, or twisting of the lobe of the liver closest to where the tumour was excised.  Finally spreading to other parts of the body can occur.