Warning: Surgery and other graphic imagery may be displayed on this page.
OSTEOARTHRITIS – DEGENERATIVE JOINT DISEASE

Osteoarthritis (OA) is the most common form of arthritis in dogs affecting a quarter of the population. It is a chronic disease characterized by loss of articular cartilage that is covering and protecting the ends of bones in most joints of the body. In association, there are other abnormalities present that include new bone formation around the joint (osteophytosis) as a response to increased instability and inflammation in the joint leading to pain.

In contrast to humans, OA in dogs most commonly occurs secondarily due to developmental orthopedic disease (cranial cruciate ligament disease, hip dysplasia, elbow dysplasia). The joints most commonly affected are the hip, stifle, and elbow. The exception to this is idiopathic (unknown cause) OA of small joints of digits (manus and pes) that is seen in older dogs. Contributing factors to OA include genetics, age of dogs, bodyweight, obesity, gender, exercise and diet.

Signs of OA are often times non-specific and include:

Diagnosis of OA is usually made by a combination of physical exam and imaging modalities such as X-rays.

Treatment recommendations for OA are multimodal which means they include different approaches and can be either conservative or surgical or a combination of both. All treatment decisions are made based on individual patients and in discussion with the animal owner and surgeon.

Here are some of the most commonly used approaches:

Unfortunately OA is a progressive disease and continues to worsen with time. The conservative approach can slow down the progression of disease and many dogs can live comfortably for years following diagnosis. If surgery is performed the recovery of those dogs is usually very good especially with total joint replacement surgery as the diseased joint is completely removed and replaced. 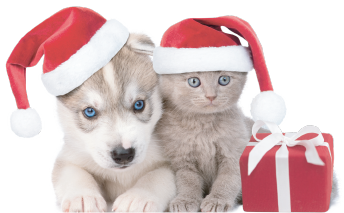